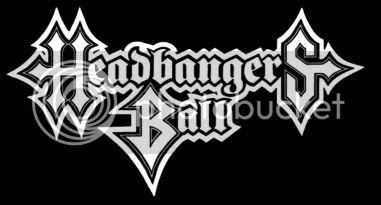 HEADBANGER'S BALL MEMORIES PT. 1. Oh man I used to watch headbanger's Ball religiously. MTV used to not shoe metal videos at all, until they started a daily 30 minute program called Hard 30, which was popular and expanded into Headbanger's Ball. Every Saturday night there would be two full hours of metal music on the TV and no one could stop me from soaking it all in. Ahhh, teenage years. Here are some of my favorites, good, or nostalgic, or otherwise, from the Headbanger's ball era.

HELLOWEEN - I Want out (I always liked this goofy video! These guys had a great sense of humor about their metal)

ANTHRAX - Got The Time (These were some hairy guys)

TESTAMENT - Nobody's Fault (video filmed in Houston. Note the old Summit of Rocket's legend, now Lakewood Church run by Osteen fuck. Also, the club they go to is the Axiom in Houston TX. many great shows at the Axiom!)

SUICIDAL TENDENCIES - Waking The Dead ("I don't care that they already died. That's not enough to make me satisfied." I used to love this band so much. I like songs about the dead.)


Trip At The Brain

OVERKILL - Elimination (the single worst singer ever in metal)

EXODUS - Toxic Waltz (Nope, this was the worst singer in metal)

KING DIAMOND - Welcome Home (I never understood this video. he wanted to do something bad to his grandma. King Diamond was a weird weird dude who was fueled by Satan, or so he thought.)

MOD - True Colors (this was kind of like a supergroup)